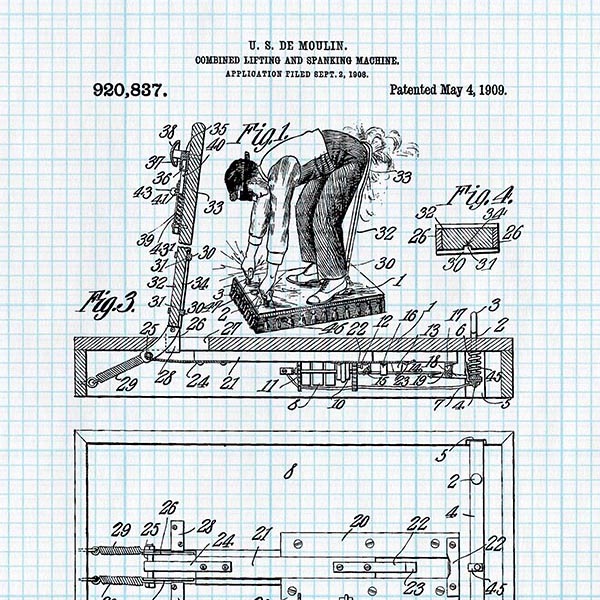 Here at Patent Earth, we look at a lot of patents. And I do mean a lot - we spend hours on end looking through patents in hopes of discovering awesome new (or old) designs. It probably won't surprise you to hear that most of the patents that we look at are, well... not so awesome. Patents with very boring illustrations, or very bad illustrations, or no illustrations at all. Those patents are no fun.

But every once in a while, we stumble upon something that's so bad it's good. Something that makes us laugh and say "I can't believe somebody actually invented this!". Like a low budget movie or a cheezy commercial, they can be a lot of fun in spite of themselves. Here's one we thought you might get a kick out of.

Ladies and gentlemen, I give you the Combined Lifting and Spanking Machine! To use this device, simply bend over at the waist and grip the handle. When you lift it, a lever will swing up behind to spank you. 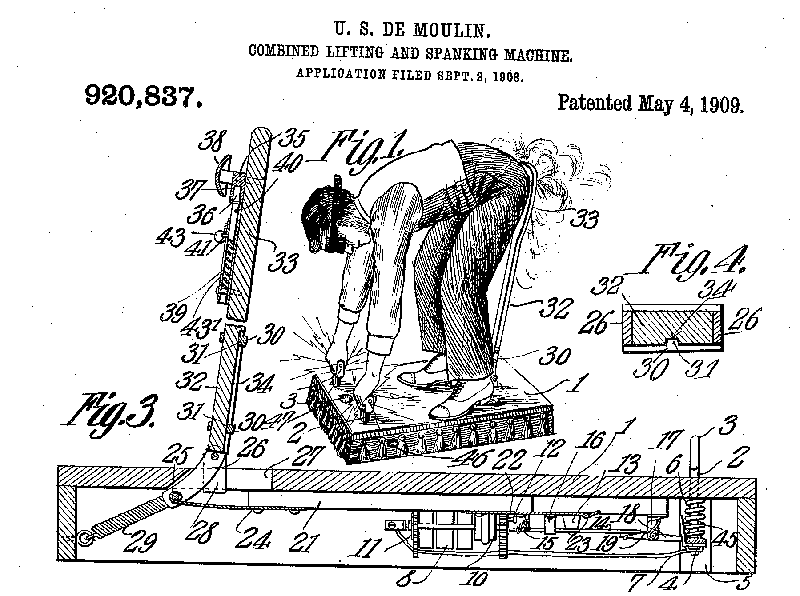 The Combined Lifting and Spanking Machine

Patented in 1909 by Ulysses S De Moulin, this machine was invented to for use in hazing and initiation rituals (such as fraternity initiations). And it wasn't his only invention. In fact, Ulysses and his brother Edmond created a number of "initiation" devices including a popular line of "hoodwinks", a trick telephone and this water-spraying contraption that according to the patent:

Of course we had to add this design to our catalog. So if you know somebody with the right sense of humor, you can get them a poster or t-shirt to commemerate the great contribution to humanity that was the Combined Lifting and Spanking Machine.

We hope you had as much fun learning about this invention as we had telling you about it!