One thing that makes bicycles so special is that they represent not only the evolution of technology, but also the evolution of human skill. While much technology is created to make life simpler and easier, few inventions have managed to achieve that while simultaneously requiring it's users to exercise their bodies and sharpen their senses of balance and coordination.

To truly appreciate this wonderful invention, let's take a look back at how bicycles came to be. We'll be covering the very first bicycle designs in history found so far all the way up to the modern era to give the most complete summary possible. Let's get started.

The very first bicycles did not exist until a few hundred years ago, but there are several sketches found during the Renaissance period that resemble a device that looks like a bicycle.

The earliest sketch on record comes from 1534 in Italy and is attributed to Gian Giacomo Caprotti, apprentice to the famous Leonardo da Vinci. However, physics professor and museum curator Hans-Erhard Lessing has decried these sketches as a hoax since 1998, but some learned people still hold onto their validity to this day, ultimately making it hard to determine what's true. 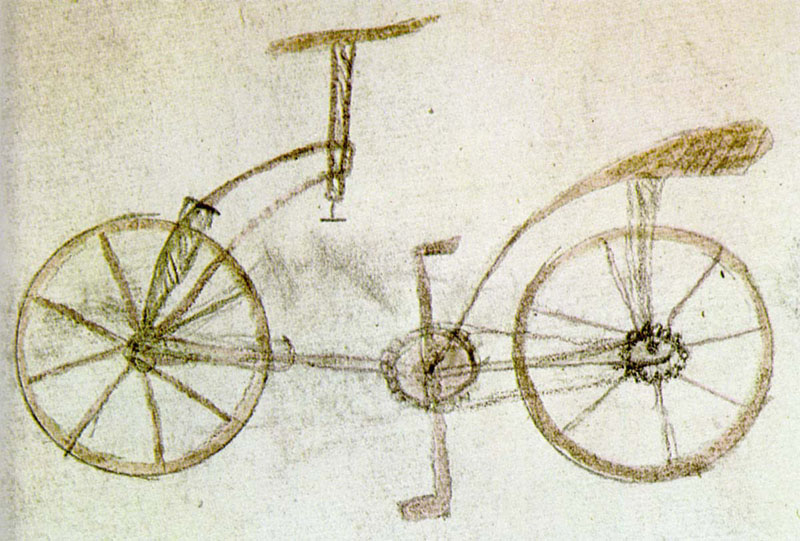 There was also a device known as a célérifère allegedly designed by a person known as Comte de Sivrac in the French royal palace, though it's entirely possible these reports were simply a misinterpretation of an existing four-wheeled device by journalists at the time. This supposed bicycle precursor had two wheels, no steering, and was powered by walking along the ground while a rider sat on top of its wooden frame.

The early 19th century, however, is when bicycles were veritably created. The first bicycle historically confirmed was made by Baron Karl von Drais in Germany. His 1817 "running machine" (or Laufmaschine) was patented a year later in 1818, becoming the first commercially successful device of its kind. Nicknamed the velocipede or dandy horse, it was fairly popular for a time and spread through many different countries all the way to England before large amounts of accidents forced city officials in Europe to outlaw it for a time, though reports of foot-powered versions can be found at least to 1866. 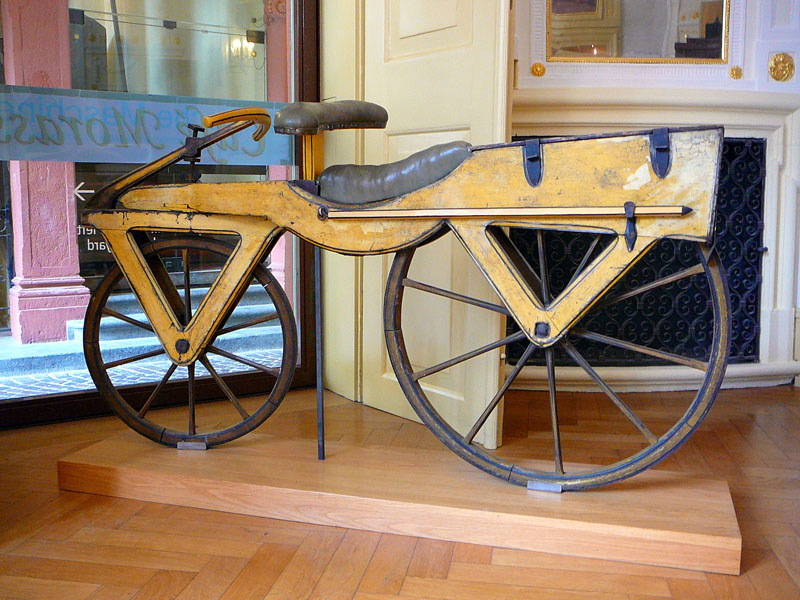 During the 1820's and beyond, inventors in several different countries worked to improve Drais' original design, with Denis Johnson of London being one notable example for helping to streamline the design. Three- and four-wheeled bikes also began to pop up during this time, as the idea of having a rider balance by themselves was mostly dismissed.

In 1839, Scottish blacksmith Kirkpatrick MacMillan created what many believe to be the first mechanically propelled vehicle on two wheels, basing the mechanics off the steam train and potentially being the first person in history to cause a bicycle-based traffic accident. There was also Gavin Dalzell in 1845 who was credited as creating a similar machine to help him with his work as a draper, though there is no actual evidence of him ever having laid claim to any bike-like designs.

1863 brought with it the Macmillan bicycle designed by Pierre and Ernest Michaux. As the first mass produced bike, it quickly gained a reputation for being uncomfortable and hard to balance with on cobbled roads, some nicknaming it the "boneshaker" for how much the wooden wheels caused it to jitter. It could, however, ride well on train tracks, the utility of which kept it popular.

All good things come to an end, though, as the boneshaker's popularity quickly died out in France during the Franco-Prussian war of 1870, with only moderate success in the United States before it fell into obscurity. Its major design flaws kept it from catching on anywhere else, flaws that would soon be rectified with the next leap forward. 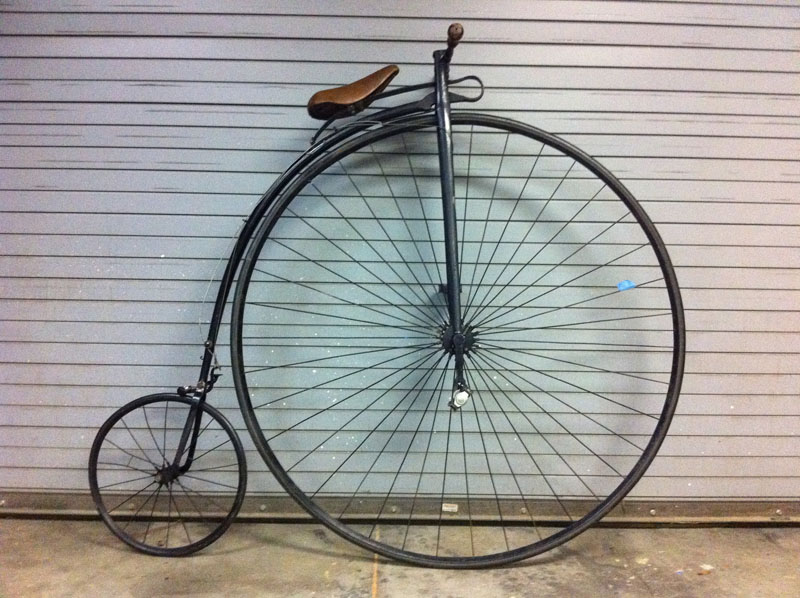 The penny-farthing bicycle is a staple of classic silent films, known for its distinctively enormous wire-spoke front wheel. With designs by Eugène Meyer that would later be improved upon by James Starley, the bicycle became sleeker, more lightweight, and more stable.

It was not without its own problems, however. The penny-farthing was notoriously hard to mount, and a person's ability to actually ride it was limited by their leg length. Traveling at higher speeds could also cause it to become unstable. In general, riders would need to be extremely skilled in order to properly use it, though modifications during the late 70's and early 80's tried to help with that.

In 1885, though, the biggest change to the concept of bicycles happened as John Kemp Starley perfected the "safety bicycle". Based on the 1979 three-wheeled "bicyclette", this bike used a wheel chain drive to assist riders in moving the wheels, allowing the designs to shift the seat towards the center of the vehicle instead of over one wheel. As a result, bicycles became much safer, more stable, and easier to control. Further popularized by John Dunlop's 1888 pneumatic bicycle tire and Isaac R Johnson's 1889 diamond frame, the safety bicycle all but eliminated the high-wheeler and laid the groundwork for the next century of development.

Companies like Raleigh, Schwinn, and other major bike manufacturers first began in the end of the 1890's, with business booming well into the 1900's. The safety bicycle, however, would soon be on its way out, replaced by the roadster model still in use today in many places across the world. 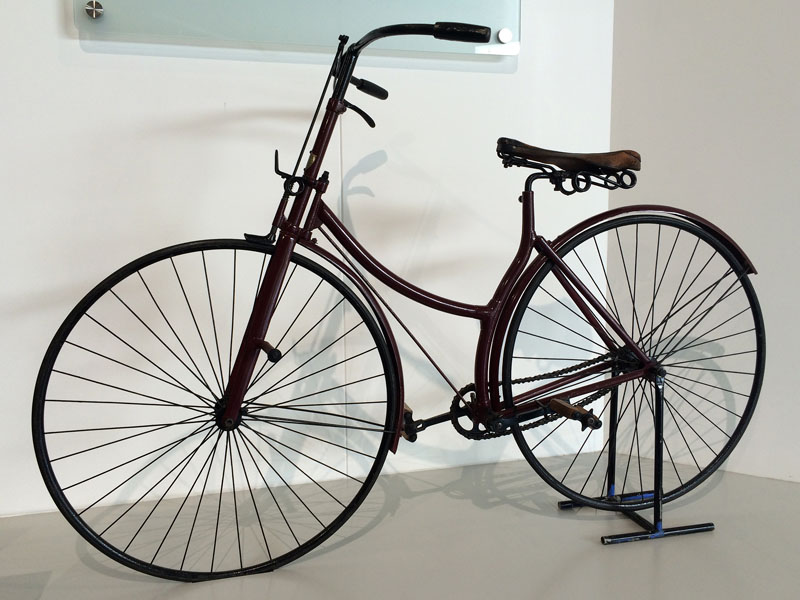 Mass production by large companies helped the roadster gain quick popularity, its focus on durability making it a prime choice for postal workers and police officers to use on the job. Additionally, styles made specifically for women (whose dresses were less than compliant with the traditional diamond frame bicycle) and sports usage helped ensure its longevity for nearly 50 years to come past the turn of the century.

The roadster is responsible for the more upright riding posture seen in modern bikes, as well as the gear changing system that allowed for greater speeds and more versatility in riding. The braking systems were also improved, allowing for full stops and coasting.

By the 1980's, even more types of bicycles became available. Bicycles made for mountain biking or BMX began to exist, with their use in extreme sports and racing increasing heavily due to more and better materials being available to manufacturers. Commuter bicycles designed specifically for travel also started to take off, working off a greater consciousness of the benefits of exercise first popularized in the 60's and 70's.

By the late 80's and early 90's, however, bicycles had all but ceased innovation. Because of new regulations by sports authorities dictating what a bicycle must be for valid competition, designers were less likely to innovate so much as refine what they had already made. Because of this, few radical changes to the general look or function of bicycles have happened since that time.

In modern times, the bicycle has remained largely unchanged in general appearance. The most striking difference between bikes now and what came before is the increased integration of different forms of technology to bicycles. This applies both to the bikes themselves as well as how they are manufactured and designed, with new technology making way for the most streamlined and efficient bicycles ever seen.

This has opened to the door for new classes of bicycles with specialized construction and features. While some of the newer bicycle technologies (such as disc brakes) are being used in almost all modern bicycles, the function and appearance of street bikes (built as thin and light as possible, with thin tires) and mountain bikes (with bigger, fatter tires and more robust framing) continue to diverge.

Hybrid bicycles (those that combine elements from street bikes and mountain bikes) have become popular, integrating comfort with increased abilities and featuring as many as 14 gears to switch between. Recumbent bicycles are also popular in certain circles, with their laid back design being popular for relaxation and fun, though a racing league composed of this and other "banned" bicycle types from major competitions do exist. 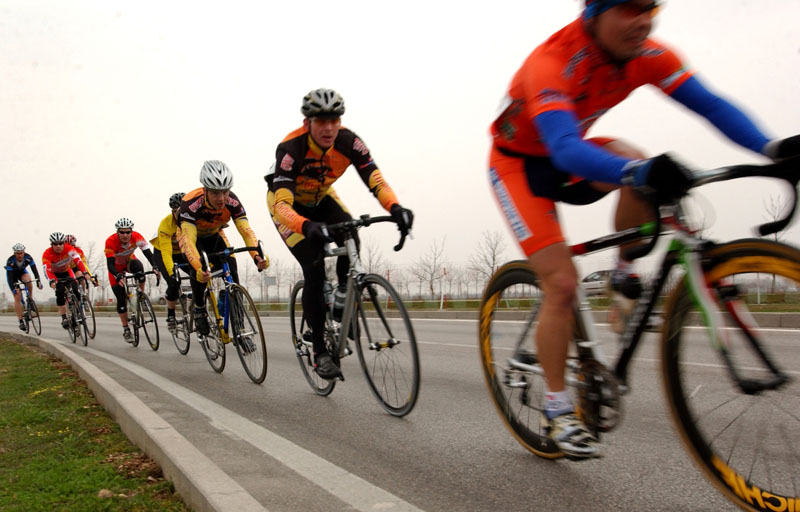 While it is hard to say what the bicycle will look like by the end of the 21st century, it is safe to assume that we will continue to see improved materials & construction, more specialized and divergent designs, and more integration of new and novel features. The possibilities for new and improved bicycles have never been more exciting!