Posted on February 16, 2020 in Inventor Biographies 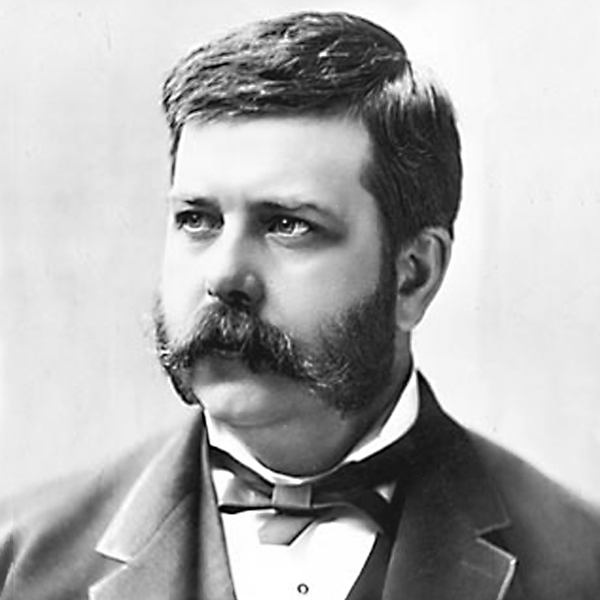 George Westinghouse Jr. was born in 1846 as the eighth child of mother Emeline and father George Westinghouse Sr. At that time the family lived in Central Bridge, New York, but they moved to Schenectady to open a new machinery shop owned by his father not long after. While these early days seemed largely uneventful for the young George, it was noted by family and friends how keen an interest the boy took in technology like the steam engine.

Things changed dramatically for Westinghouse when, at the age of only 15 in 1861, he enlisted to fight in the American Civil War. Signing up for the New York National Guard, Westinghouse served less than a year before his parents convinced him to return home. However, he enlisted once again in 1863, this time as part of the 16th New York Cavalry. He earned the rank of corporal before leaving the army to join the Navy in December of 1864, finally being discharged for good after the war ended half a year later.

With things finally settling down, Westinghouse took the opportunity to attend school. Enrolling in Union College, he managed to make it three months before losing interest in the curriculum and dropping out. 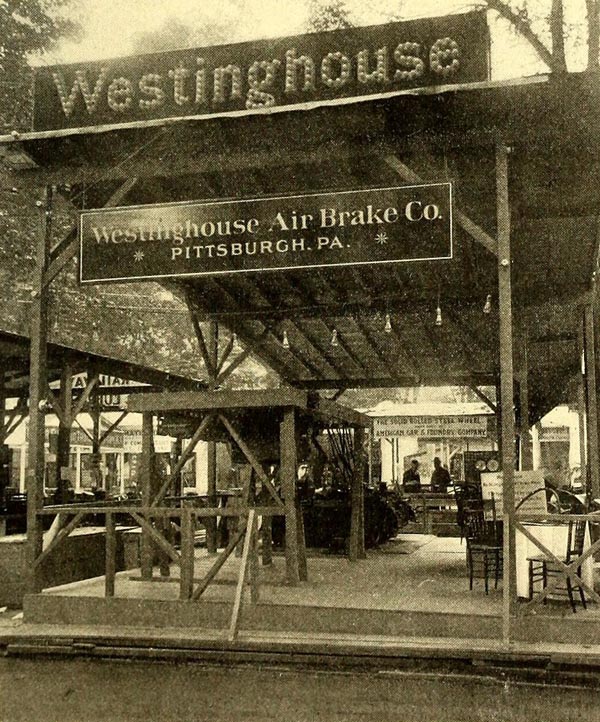 The Westinghouse Air Brake company in Pittsburgh, circa 1884.

This was far from the end for Westinghouse, however. Near the tail end of 1865 at only 19 years of age, he used his knowledge of steam power to create the rotary steam engine, patenting it shortly after. This new advent of steam power allowed for the creation of the Westinghouse Farm Engine,1 a type of early steam engine used on farms to power various equipment.

What followed were several years with several more incredible achievements, Westinghouse seeming to find his true calling as an inventor. In 1869, he made one of the most significant breakthroughs in his career with the advent of the improved air brake, streamlining the previously inefficient and life-threatening process of braking train cars by centralizing the brakes into a single lever, using pipes running along the whole length of the train and its cars to simultaneously slow them all at once.

Westinghouse patented this idea in 18732 to immediate and near-universal success. Nearly all train companies eventually began using his designs given how vastly superior they were to the older methods, so much so that Westinghouse soon set up the Westinghouse Air Brake Company to manufacture them in great enough volume to meet the high demand. Even today with the many improvements technology has made, most modern railway braking systems still rely upon Westinghouse's early concepts as a base.

It wasn't just brakes that Westinghouse sought to improve however. He went on to form the Union Switch and Signal Company to build on the many ways he could imagine to better railway travel overall. One of his significant contributions was helping to modernize the signals used along tracks, changing them from oil lamps to electrical and air-powered in nature.

In general, life was good for Westinghouse in this era. Even before his numerous inventions, patents and fortune, he'd met Marguerite Erskine Walker years earlier, the two marrying in 1867 and having a son, George Westinghouse III. The family lived comfortably thanks to the success of his work, especially with his foray into natural gas piping in 1883, making the process both safer and more effective using what he'd learned from working on train braking systems.

However, Westinghouse's interests shifted sharply after that to electricity. While he had used the then-recent developments in electrical engineering to improve train signals before, this was the time when his curiosity with the power source grew into a full-blown obsession.

In 1885, Westinghouse had a pair of Gaulard-Gibbs transformers and a Siemens AC generator shipped to him from Europe, intent on testing out the power of alternating current power generation. While this technology was common in other countries, America at the time was firmly stuck in direct current (DC) power generation. Even Westinghouse himself had dabbled in DC just a year prior with the help of physicist William Stanley.

His change of focus to AC power came after learning of its more versatile uses, allowing power to be distributed to less centralized areas over longer distances. Westinghouse saw this as a chance to make a large amount of money by taking advantage of then-untapped areas of the market rather than put himself in direct competition with Thomas Edison and other DC power providers.3

Working with Stanley and others in a Pittsburgh lab, the team made a breakthrough in developing a working transformer, giving demonstrations in 1886 after creating a viable power system in Great Barrington, Massachusetts. With the success of their work so far, the Westinghouse Electric & Manufacturing Company was established, later changing its name to just the Westinghouse Electric Company in 1889.

Much of Westinghouse and his company's success during this time came as a result of Nikola Tesla. Previously employed by Edison and a genius in his own right, Tesla had left his previous employer to become a free agent and inventor. Westinghouse had managed to secure the exclusive right to use Tesla's patents regarding advancements in AC power generation, this arrangement making the both of them quite wealthy and a force to be reckoned with in the market.

Despite not wanting to involve himself in competition, competition found itself at Westinghouse's door by the end of the 1880's. Though Edison still controlled a greater number of power stations than Westinghouse, the relative benefits of AC power for home usage still made the two bitter rivals. 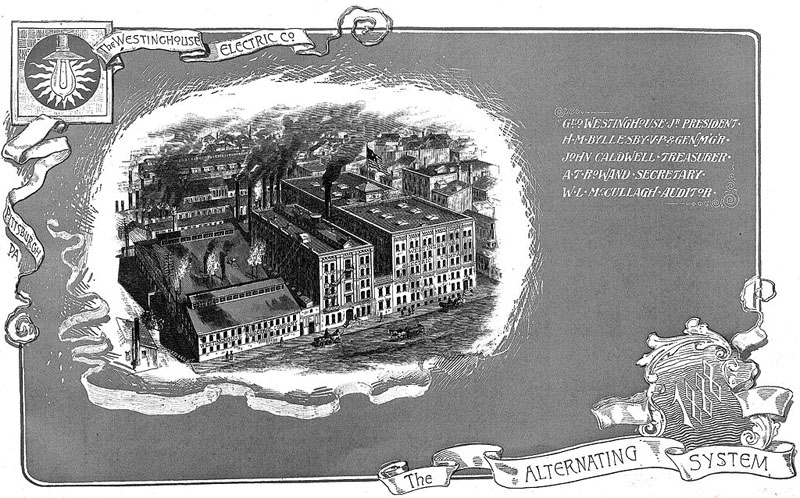 This era starting in 1887 was dubbed the War of the Currents, with Westinghouse, Edison and the competing AC-based Thomson-Houston Electric Company all fighting for market dominance. While Thomas-Houston made efforts to get along with Westinghouse generally, Edison and his people were far less agreeable. At its worst, the two men were launching full-scale propaganda attacks at each other, pointing out the downsides of each method of power generation and capitalizing on any tragedy or hardship that could possibly be connected to their competitor.

The worst of this came in 1890 in which, through dealings by both Edison and Thomas-Houston, it was arranged that convicted murderer William Kimmler5 would be executed via electrocution powered by a Westinghouse AC power generator. Westinghouse was forced to hire lawyers to defend Kimmler due to the public relations nightmare this could cause. Kimmler was eventually executed as planned, his death at the hands of the electric chair going extremely poorly and painfully.

While a blow to his image, Westinghouse continued to work in electricity and strive towards innovation. Optimistic as he was, there were some dark days ahead for the inventor and his company. The war of the currents was more or less over by 1892, with Edison Electric and Thomas-Houston merging into General Electric.6 Their new power production involved a systems for both AC and DC generation, strengthening them in the realm of competition to the point that it was becoming hard to compete against them at all.

Aftermath of the War of Currents

To make matters worse, Westinghouse's finances were still suffering from the financial panic of 1890. With the Barings Bank situation in London still dire, many of Westinghouse's early investors began calling in their debts, all demanding money that Westinghouse simply did not have.

Forced to refinance his loans and reassess his business, Westinghouse needed to cut corners. This meant he was no longer able to aggressively buy up patents and companies related to AC power as he once had, and even required renegotiating his deal with Tesla from years prior to stop paying royalties for his patents.

The opening of the Ames Hydroelectric Generating Plant in 1891 was certainly helpful for Westinghouse's financial situation. Used to power the Gold King Mine, it was the first successful demonstration of just how far AC power could be transported. This paved the way for the 1893 completion of the Tesla Polyphase System, a new and improved system of power generation based on Tesla's creations. More important than even its direct benefits was its litigious uses, Westinghouse declaring that his association with Tesla and his exclusive use of the man's patents gave him the right to sue those who might be infringing upon his new technology. 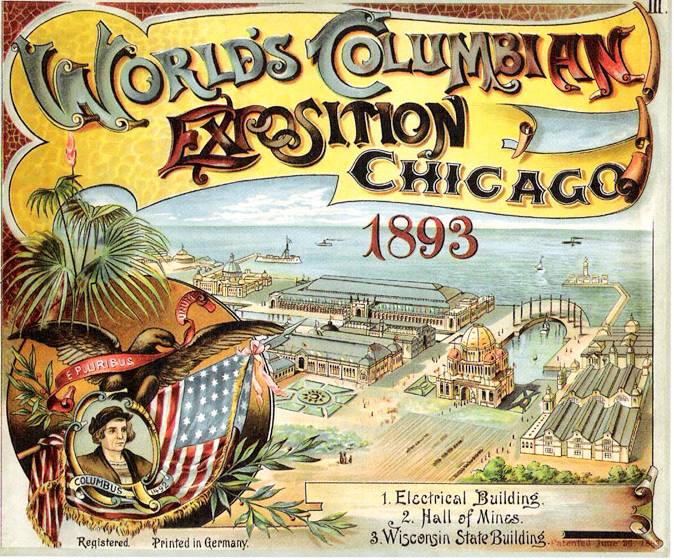 Flyer for the first World Columbian Exposition in 1893.

The height of Westinghouse's success in power during this era came after winning the bid to power the 1893 World's Columbian Exposition in Chicago with AC lighting. Not only was this a lucrative contract for the company, the expo held its own power demonstration using Westinghouse's AC power generators. This demonstrated the safety and reliability of his products to the public, eventually catching the eye of the developers for the Adams Power Plant at Niagra Falls, an 1895 creation powered by Westinghouse's technology.

For the rest of the years up to the turn of the century, Westinghouse Electric was largely embroiled in a number of legal battles with General Electric. Hoping to quash their competition, GE went on a spree of lawsuits and buyouts of various electric companies, Westinghouse included. Unable to continue fighting these battles, Westinghouse is eventually forced to sign an agreement to share his patents with GE.7

Though things were difficult for Westinghouse, he didn't let General Electric's aggression bring him down. Even up to and after the patent agreement, he was still looking for new ways to further innovate AC power. After buying the patent for Charles Algernon Parsons' steam turbine in 1885, Westinghouse finally unveiled a significantly improved version in 1898, replacing the reciprocating power engines in his air brake factory with the more efficient technology and doing the same for the Hartford Electric Light Company in 1899. 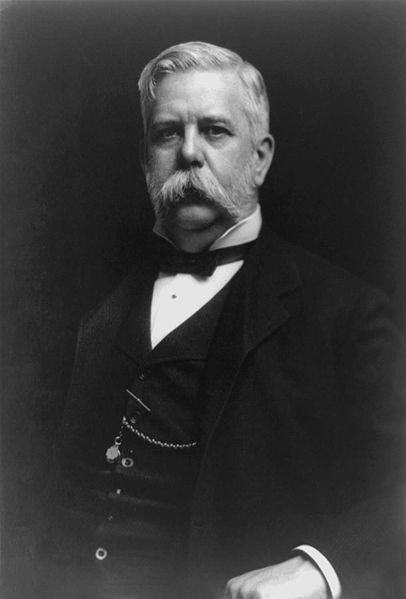 He later used this same technology for ships, figuring out a way to upscale the turbine technology to work with even the largest vessels. This led him to later start looking into heat pump technology, endeavoring to find a perpetual energy source in a pump so efficient that it could power itself with the heat it collected.

The financial crisis of 1907 hit Westinghouse hard, eventually driving him to resign from his various companies.8 This didn't mean he was done with inventing, though. With cars beginning to develop, Westinghouse looked back to his earlier air brake system for trains and found a way to scale it for the automobile, resulting in compressed air shock absorbers in 1910. It was his last major project.

Westinghouse's health declined during these last few years, his doctors diagnosing him with heart conditions. With no signs of improvement, he was bedridden for large portion of the end of his life and used a wheelchair to get around. He passed away on March 12, 1914. Though first buried in the Woodlawn Cemetery in the Bronx, he was moved a year later to Arlington National Cemetery9 along with his wife who died barely three months after he did.

Even long after his death, Westinghouse is still remembered for his great achievements in science and technology. With 361 patents to his name by the end, he fundamentally changed the way railways, power generation and countless other industries operated.